The search is on for a contractor to build the Court Theatre’s new central city home.

Christchurch City Council is calling for registrations of interest from contractors keen to take on the multi-million dollar project, on the corner of Colombo and Gloucester streets, in the city’s Performing Arts Precinct.

“The Expression of Interest process for a main contractor to build The Court Theatre’s new three-storey home will be open for four weeks until 1 June.  After this, we will short-list companies to go to tender at the end of this year before awarding the contract early next year,’’ says Christchurch City Council Citizens and Community, Principal Advisor, Brent Smith. 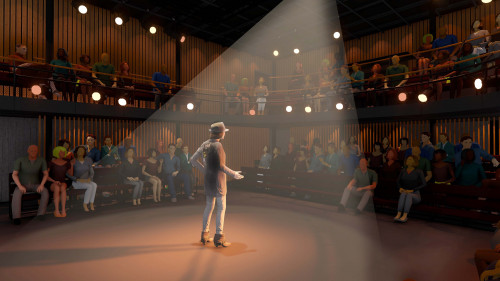 An artist’s impression of one of the performing spaces inside The Court Theatre.

“The release of the Expression of Interest is a clear signal that we’re planning to begin construction of the theatre early next year, as intended. We’re very grateful for the continued strong partnership with The Court Theatre, our architects and wider consultant team which, undoubtedly, is contributing to the steady progress on this project.”

Preliminary design work on The Court Theatre’s new home has now been completed and new artist’s impressions can be revealed of the facility, which will include a 360-seat main playhouse auditorium; a 130-seat studio theatre, where children’s and family shows can be held; education and rehearsal rooms; and front-of-house facilities.

Athfield Architects, along with London-based architects Haworth Tompkins and a wider Christchurch consultant team, have been advancing the preliminary design since January.

This latest design includes a number of key tweaks to the concept design released last year, including improving some of the back-of-house spaces, changing the layout of the studio theatre and selecting the building’s interior and exterior colours.

The Court Theatre Chief Executive Barbara George says, “We have been intimately involved in all stages of our new home to this point, and sincerely thank the Council project team for allowing us virtually unfettered access to architects Haworth Tompkins and Athfield Architects.  The wider project team has been a pleasure to work with, and we are feeling very comfortable about progress, all singing from the same hymn sheet, as it were.”

Athfield Architects Principal Jon Rennie says, “As the team shifts from the big picture to the finer detail we look forward to developing the design and documentation through 2021, and bringing a contractor into the team in the new year. We can’t wait to break ground and start construction.”

The Council is committing $30 million towards the development of the Performing Arts Precinct, which includes the construction of The Court Theatre, the public space and landscaping. This funding was set aside in the Council’s Long Term Plan 2018-2028.

The Court is also fundraising $6 million as its contribution towards the project and the Crown has provided the land and some funding under the terms of the global settlement agreement with the Council.

The Court Theatre’s new home is due to be completed in 2023.

Anyone interested in putting in an expression of interest for construction of The Court Theatre can find out more here.