A Christchurch high school student believes a simple wool filter could go a long way in stopping microplastics from entering our waterways – and she has evidence to back up her theory. 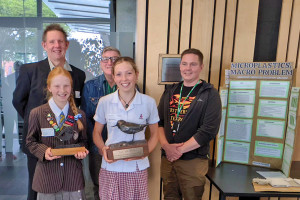 “A third of all microplastics found in the ocean originates from our laundry – every time we wash our clothes, tiny strands of fabric come off and get washed away with the water,” Cashmere High School Year 10 student Millie Palmer said.

“If we could stop these microplastics from ever leaving our washing machines, then we would be doing both the environment and ourselves a huge favour. If everyone had these cartridges (filters), millions of microplastics will be prevented from reaching the water cycle.”

She discovered that wool performed best as it filtered 100 percent of the microplastics, confirming her hypothesis.

Her efforts have won her the Wrybill Trophy, an annual science prize for school students across Canterbury named after the bird with a distinctive bent beak that is found only around braided rivers in the South Island.

Our next wicked problem

The Wrybill Awards is backed by us and has been running since 1996.

To win the top trophy, students must exhibit outstanding projects on environmental themes relating to the Council’s portfolios or work streams, particularly around how we look after our natural resources while offering innovative solutions.

Winners from local science fairs present their projects to a panel including Canterbury Regional Councillors, Environment Canterbury staff and an external judge.

This year’s external judge, Lincoln University Professor Jon Hickford, said it was a tough decision, however, Millie took out the award for her work on microplastics, which he described as our “next wicked problem”.

“Over the past five years, microplastic filtration has begun to develop. However, no products I came across used sustainable filter materials.”

Young scientists impress with their innovations 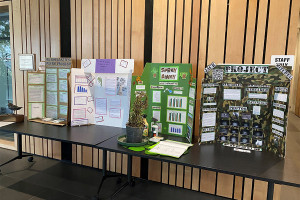 Prof Hickford was “blown away” with the quality of the presentations and was impressed to see how Wakanui School students Mitchell Digby and Jack Bennet used technology for their experiment on finding the best bait to catch possums.

Environment Canterbury Chair Peter Scott said running the awards was a team effort, with teachers and parents providing support for students, along with the commitment of Councillors and staff who assisted with judging.

“But the real stars are the young people. They show so much initiative and, once they get going, their passion for the environment and enthusiasm is infectious.

“It’s such a positive thing for Environment Canterbury to be involved in, supporting and inspiring young people as they find solutions to problems our generation has caused.

“We’ve had some interesting people at these awards over the years and it’s fascinating to see where they pop up again in the future,” he said.