The funding will create 15 new jobs and enable predator eradication over large parts of Banks Peninsula and Kaitōrete.

The announcement was made on 9 August at an event on pest-free Ōtamahua/Quail Island in Whakaraupō/Lyttelton Harbour. 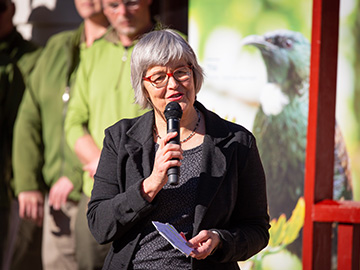 The funding agreement was signed by Predator Free 2050 Limited Acting CEO Prof Dan Tompkins and Banks Peninsula Conservation Trust Chair Mark Christensen, on behalf of the 14 organisations signed up to the PFPB vision to be pest-free.

Christensen said: “In November 2018 we agreed to work together as landowners, community groups, iwi, councils and Department of Conservation so that our native plants, birds, animals and insects are flourishing on Banks Peninsula, free from the threats of introduced animal pests.

“Today, the realisation of this vision has taken a significant leap forward.”

“It will benefit many special native species, such as the jewelled gecko, which are threatened with extinction if we do not remove pests.”

Local Ngāi Tahu rūnanga are also strongly engaged in the project and working with the community to restore these sites.

The programme will focus on the eradication of possums and suppression of mustelids, rats and feral cats to low levels. Possum and goat numbers on Banks Peninsula have been reduced significantly in recent years and there are many well-established trapping programmes.

“We now have projects established on the country’s major peninsulas, where geography helps meet the aim of removing predators and protecting from reinvasion. These are important pathfinder investments that enable communities, landowners and iwi to protect and return natural taonga.”

Pest control efforts by landowners on the south-east Wildside area of Banks Peninsula have already contributed to the recovery of endangered populations of hōiho/yellow-eyed penguins, kororā/little blue penguins and tītī/sooty shearwater. Tūi have also been successfully reintroduced.